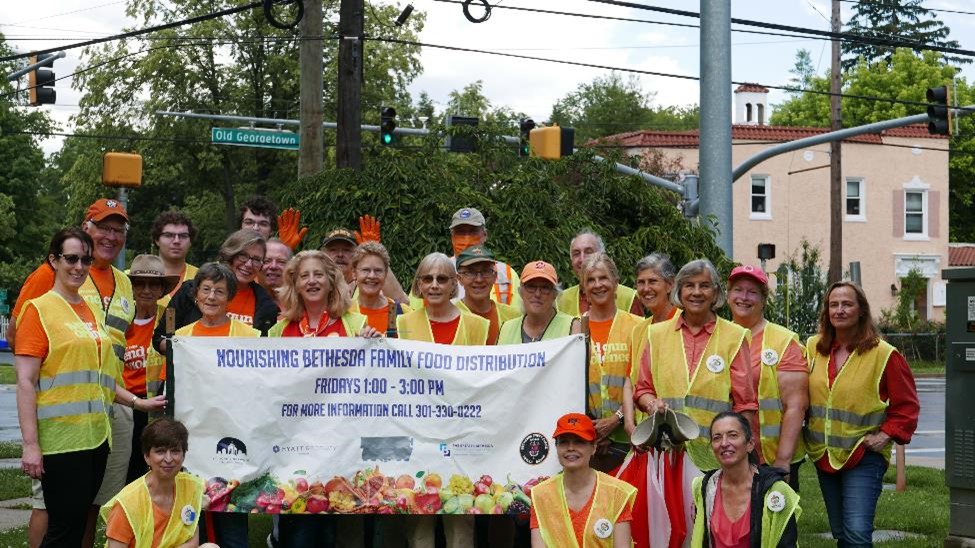 Thank you, St. John’s, for wearing orange in support of National Gun Violence Awareness Weekend. On Thursday evening, June 3, orange-wearing Nourishing Bethesda volunteers packed Be Smart cards about gun safety into 300 food packages, then assembled on the Tower Lawn for a photo.

On Friday, Nourishing Bethesda honored Andrea Chamblee, the sister-in-law of parishioner Jan McNamara. Andrea, who lost her husband John in the 2018 Capital Gazette, spoke of the traumatic ripple effects of gun violence on the families and friends of victims. Deacon Anne Derse offered a prayer for gun violence prevention.

On Sunday, Deacon Giselle Morch of Montgomery Hills Baptist Church preached about the murder of her 20-year-old son Jaycee and how the Holy Spirit helped her find strength and forgiveness. Watch her sermon here. She joined Sari in conversation at the forum, which was also attended by many members of Moms Demand Action, for a frank and emotional discussion of how gun violence affects all of us. Giselle exhorted us to move beyond thoughts and prayers, demonstrating our faith through our works (James 2:18; see attachment). The forum ended as those assembled spoke the names of loved ones who had died from gun violence. Watch the forum recording here.